Happy Holidays Everyone! Thanks again for getting in the writing mood and sharing. Here's the roundup for MxMo December 2009.

Edward over at Wordsmithing Pantagruel made some people go bananas with the notion of Monkey drinks, but that wasn't the case. I say he petitions Paul for the theme Simian Sips sometime in 2010. Hey took fat washing to another place with a Vieux Gras with Foie Gras-Infused Cognac. 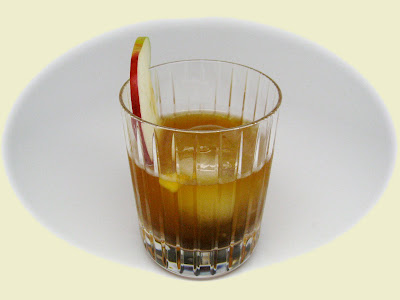 Citations and footnotes aside, I haven't made her a drink yet, but we've chatted on the same side of the stick several times and Stevi Deter at Two at the Most offers up a recipe that truly has me green with envy. The Vanilla Whiskey Royale sounds delicious. I missed last weekendsHouse Spirits Distillery open house due to work and I really want a bottle of each.... even the white dog Stevi missed.

Paul Clarke at Cocktail Chronicles is the overlord and supreme deity in the MxMo galaxy and he blessed/cursed me with this months roundup, and since it was late to begin with, and I'm late in writing, and he thinks blogger has a problem with its timestamp.... everything is fine. Paul went East India and waxes poetic about growing up and being weened on Lucerne.
I Can attest that Paul Flinton at Ganymeda is true to his blogger tagline of making his liver work for a living. He is a national man of mystery and always comes and goes as he pleases..... no matter how much Fernet I throw his way. What can I say, He's an old fashioned kinda guy.

Kevin Gray at Cocktail Enthusiast is preaching to the choir here, but for those of you who don't know the powers of a French 75 on a hazy morning during brunch are sorely out of sorts. To qoute "Composed of gin, fresh lemon juice, simple syrup and Champagne, the French 75 is a light, refreshing cocktail that subdues the wary gin-drinker while still packing a sizeable boozy wallop. This tart, tasty concoction has made even the most dubious skeptic rethink their distaste for gin, without alienating fans of the spirit. "

eGullet.org is an amazing site where people who wish to write about food or drink can do so for our little MxMo rabble. Chris Amirault wanted me to note:
The highlights include a lot of brown spirits: Katie Loeb's fine Manhattan with Michter's Rye and Carpano Antica, Andy Arrington's fine Manhattan with George T. Stagg and -- yes -- Carpano Antica, Dave Viola's Rob Roy with Macallan cask strength and my Rum Old Fashioned with Inner Circle Green and Jerry Thomas Decanter bitters. Dave then offered up a Hemingway Daiquiri with Rhum JM 1997, and I wrapped with a Marteau absinthe Gasper: yum.

Felicia over at Felicia's Speakeasy thinks Eggnog ( I say that it's one word ) is money during the holidays. the Eggnog Martini is offered up, as well as just spiking the morning Joe.

Since we're talking about it, Shawn from Rejiggered crafted a holiday cocktail that features lemon and orange sour flavors with the earthy caramel appeal of dark rum, tempered with fizzy dry champagne.
Christmas Cheer 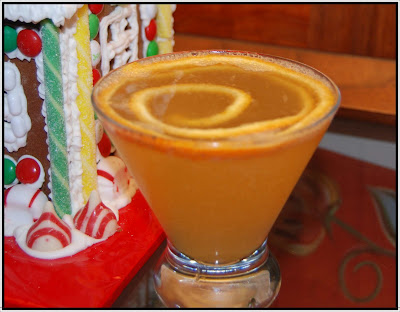 I think me and this Daniel chap from Gin, Not Vodka would get along splendidly, it sounds like he likes a smokey Blood and Sand as much as I do and surmises, " I find that scotch can be easily one of the biggest hurdles for a new cocktailian, so this drink allows the drinker to come to terms with scotch and scotch cocktails in a way that is mellow, fruity and sweet enough to be accessible, but still so complex that it never loses its edge after having them time and time again. " 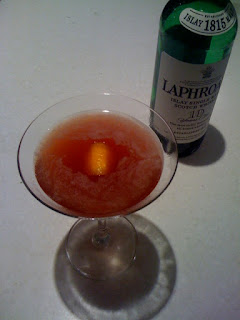 The Opinionated Alchemist is getting sour on this months theme in a good way. Go check it out. The Maple Rare Breed Sour is all sorts of my favourite things in one glass.
Ladies and Gentlemen, Start your engines! Tristan Stephenson of The Wild Drink Blog took a drink that was money to old school sailors and deconstructed it into a GT Turbo. A Mountain Of Crushed Ice made me notice one thing... the rum aficionados have some great bottles. as stated "So i want to upgrade a drink and i know what i want to make, i want to mix up the best Cuba Libre or Rum & Coke ever!" The Spiced Sugarcane Rum & Coke is the result.
Speaking of rum. I had the fine pleasure of hanging out with Rumdood, Matt Robold last week and His entry is the 300$ Mai Tai. He says " I know it might seem a bit crazy to put such expensive rums into a cocktail, but when you consider that the original Mai Tai called specifically for Wray & Nephew 17 Year Old Rum, and that today that rum goes for about $60,000US, you’d have to say that the $300 Mai Tai is a real bargain, right?" I couldn't agree more.

Dr. Bamboo writes us about the Tailspin and says " I pulled the Tailspin from the 1936 edition of the Old Mr. Boston DeLuxe Official Bar-tender's Guide and it looked like a winner: Gin, green Chartreuse, and sweet vermouth in equal proportions all topped off with a dash of orange bitters. I like all those ingredients, so it was the perfect drink to spruce up with some of the spiffier denizens of my liquor cabinet. " The details of the recipe history over the years from the Mr. Boston guide is fun to see.
Drinksnob purposes "Both Benedictine and Chartreuse are what I would call “problem” ingredients. Tasted by themselves they are overwhelming, especially Chartreuse. Not what you want to spring on someone, unawares. I would argue that the Widow’s Kiss is a “money drink” if there ever were one, for wrapping these difficult ingredients into a drink that somehow tastes mostly of spiced honey and the warm, slightly stuffy attic of some archetypal grandmother, comfortable and headachey, with surprises hidden around every corner."
A Widows Kiss

Scomorokh at Science of Drink actually surprised me with a comprehensive history on the bane of many bartenders existences, the Cosmopolitan. There's a reason its money.

The fine folks over at Intelligent Bartender have a whole slew of great recipes and pretty pictures. Gavin states: We've got a few including but not limited to KFC Sazerac, Crown XR Manhattan with JT's Decanter Bitters and Amarena cherries + 4 more." 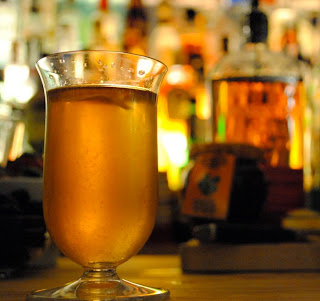 Jacob Grier brings in the money with his H'ronmeer's Flame. There is nothing wrong with naming a cocktail after a comic reference if you ask me. The only problem with my favorite drink to ease people into the world of craft cocktails is that I don't know its real name! I have heard it called both a Final Ward and a Refined Speech, or a variation on either one of those; obviously it's based on the Last Word.

Sweet, sour, bitter, herbal: it's complex but goes down easy.

Did you not get my drink entry?