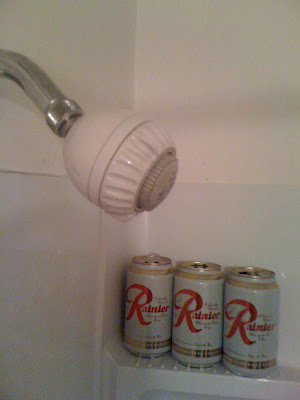 Rainier Brewing Company (1884 – 1999) was a Seattle, Washington, company that brewed Rainier Beer, a popular brand in the Pacific Northwest of the United States. Although Rainier was founded in 1884, the Seattle site had been brewing beer since 1878. While the beer enjoys near iconic status, it is no longer brewed in Seattle, nor is the company owned locally. In the late 1990s, the company was sold to Stroh's, then to Pabst Brewing Company, though Miller contract brews most of Pabst's beers. The brewery was closed by Pabst in 1999 and sold.

Although beer is no longer brewed there, the brewery itself is still a fixture in the south end of town, adjacent to I-5 just north of the Spokane Street Viaduct. The plant is now used by Tully's Coffee to roast beans. The trademark red neon "R" that sat atop the building has been replaced with a green "T" for the new occupant. The neon "R" is now in the collection of Seattle's Museum of History and Industry. When Seattle TV and radio stations provide traffic reports for I-5, the stretch of freeway there is known as "The Brewery," as in "traffic is heavy at the Brewery." [citation needed]

Rainier Beer and the brewery date back to 1884, when Edward Sweeney established the Claussen-Sweeney Brewing Company in the Georgetown neighborhood of Seattle. In 1893, Sweeney's company merged with two other breweries; the new company became known as the Seattle Brewing and Malting Company. Originally, all three of the breweries were operated by this company, but it was the Claussen-Sweeney brewery which would remain in operation until 1999 and become a Seattle landmark.

Alcoholic beverages were outlawed in Washington state in 1916[1] and the Rainier brand was sold to a San Francisco, California company. Four years later, alcoholic beverages were outlawed nationwide. Following the repeal of prohibition, the brewery was purchased by Lethbridge, Alberta brewers Fritz and Emil Sick, who then repurchased the Rainier brand and began brewing Rainier in 1935. The brewery went through several names, such as Sick's Seattle Brewing and Malting and Sicks Rainier Brewing Company, during the 1935–1977 period.

After Rainier Brewing Company resumed producing "Rainier Beer" after the end of Prohibition and its advertisements became ubiquitous in the Seattle-Tacoma area, a rumor began circulating that the brewery's owner, Emil Sick, had bribed a Washington state committee with free beer to name the local mountain "Rainier". This, however, is an urban legend and can still be heard today among Tacoma residents who preferred the alternate name of "Mount Tahoma".[2] Sick did, however, purchase the local baseball team and named them the Seattle Rainiers for this purpose.[3]

Sick's also brewed Rainier at a branch brewery in Spokane. The Spokane brewery closed in 1962.

From 1952 to 1964, Rainier came packaged in a series of decorative beer cans known as the Rainier Jubilee Series. First in the series were a set of Christmas cans marketed in late 1952 and again in late 1953; these cans are rare and highly collectible today. The Christmas cans proved such a success that Rainier's use of decorative Jubilee Series cans continued for over a decade, with literally thousands of different designs. Most of these are not as rare and collectible as the Christmas cans, but the "reindeer" cans (which were sold only in Alaska), and the first pull tab Jubilee cans (made only in the last couple of years of the Jubilee Series) are also considered rare.

Other brands of beer brewed by Sick's Rainier Brewing during this time included Rheinlander and Sick's Select. Later, the Rainier brewery would also take over brewingHeidelberg beer after its brewery in Tacoma, Washington, closed. Each of these brands (as well as rival Northwest brands Lucky Lager, Olympia, and Blitz-Weinhard) were once staples in the Pacific Northwest beer market, but starting in the 1960s and 1970s began losing market share to the major national brands.

During the 1970s, Rainier ran a number of memorable television ads in the Pacific Northwest, largely conceived by Seattle designer Terry Heckler,[4] assisted by several of his staff, especially Ed Leimbacher, writer/producer for Rainier print, radio and TV for a dozen years. Some of these noted by Seattle Magazineincluded the Running of the MFRs (Mountain Fresh Rainiers)(a parody of Running of the Bulls featuring bottles with legs), frogs that croaked "Rainier Beer" (a motif appropriated many years later by Budweiser), Mickey Rooney appeared in several TV ads, most notably a parody of Nelson Eddy and Jeanette MacDonald's "Indian Love Call" from the 1936 MGM film "Rose Marie". Mickey was dressed in a Mountie costume alongside his wife Jan as they sang. (most airings of this commercial ended with Rooney pouring a bottle of Rainier into her proffered glass, but occasionally a version was aired in which he poured the beer into her cleavage). A motorcycle that revved "raiiiiiiiii-nieeeeeeeer-beeeeeeeer" while zooming by along a mountain road. (A version of this commercial played on radio featured the sounds of different brands of motorcycles making the "rainier beer" revving sound.) Other ads featured a Lawrence Welk double (played by actor Pat Harrington Jr.) leading his band in "The Wunnerful Rainier Waltz" complete with bubble machine and soloists blowing on beer bottles, and a performance of a parody of the song "You're the Tops" while thousands of Rainier bottle caps fell like dominoes in a giant "R" frame (the whole commercial was reportedly shot on the first take, a great relief since it took all day to set up). Rainier also produced humorous posters such as a "National Beergraphic" parody of a National Geographic Magazine cover depicting tourists encountering a MFR in the forest, and a Flash Gordon/Star Wars poster, "Fresh Wars" that recalled the bar scene in Episode 4. There were even costumed MFRs that made promotional appearances at Supermarkets during this period.

In 1977 the brewery was sold to G. Heileman Brewing Company, and passed through several more hands before finally winding up owned by Pabst, which closed it in 1999. The Rainier brand was sold to General Brewing Company, which moved production to the Olympia brewery in nearby Tumwater, Washington. The Olympia Brewing Company closed in 2003. Rainier Beer is now brewed under contract in California.[citation needed]

The beer's iconic status locally caused it to be referred to as "Vitamin R."[citation needed]

In 1987, Rainier was awarded a silver medal by the Great American Beer Festival in the category of Best American Light Lager. The GABF recognized Rainier again in 1990, 1998, and 2000 with the gold medal for Best American-Style Lager as well as silver medals in the same category in 2003 and 2005. Both Rainier Light and Rainier Ice have received medals, in their respective categories, from the GABF.

In cultural reference, the seminal Seattle grunge group Mudhoney was humorously photographed in 1988 with cans of Rainier Beer. The image can be seen on the inside CD cover of the band's Superfuzz Bigmuff + Early Singles release. In the 2008 film Twilight, set in Forks, WA, Rainier Beer appears prominently in several scenes, and is referred to as "Vitamin R."

They also in my opinion had one of the best advertising campaigns ever.