lately i've ben streaming Bleach at Surfthechannel.com and episode 44 just was amazing!
Posted by KL at 5:39 AM No comments:

I bought my first bar today! 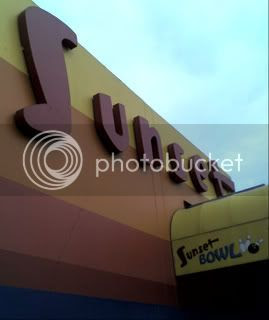 So at the auction I watched as people were paying ridiculous amounts for plates and glassware anything else that was left over and pretty much everything got priced out of my range. The welcome mat went for $475, the lanes went for $1k a piece, and I even knew the guy who bought the old karaoke speakers. I also noticed the guy who actually bought the actual bartop and surrounding wood for the screaming deal of 50$.

I immediately had an Idea. So later in the afternoon I went over and asked if he had plans for the bar and he said he was only interested in the locking liquor cabinets. The plan I had was if he has no plans, to see if my boss who just bought a house would like it for his recroom as a housewarmng present. The boss agreed pending approval of the misses, but I think this is gonna go down.

Sunset auction is tomorrow and I hope to bring home a little nostalgia.... check the list HERE
Posted by KL at 4:10 AM No comments:

SO, yesterday was what I'm going to future refer to as day one of my tenure at the Sitting Room.

I went over squirrel stuff with my manager and was able to get my number which will give me one less thing to remember. proceeded to acclimate myself to the layout. for the first two hours I did well learning the minute differences, such as the pour spouts are quicker so I need to shorten my counts a bit, and they are very measured on their wines and have a glass I'm learning to measure up to. Also for the first two hours I made 95% of the drinks correctly. Granted it was mainly wines and goose&tonics but there were a few manhattans, cosmos, and bellinis thrown into the mix. I was cut at about two and a half hours in and proceeded to try a menu cocktail and the salumi while enjoying a chat with my new manager.

Left work and went to visit some old friends in the QA neighborhood. Went by Ozzie's and said hello to Darrick and let him know that i was now working one block away and would see him often. Left there and had fifteen minutes to kill before my bus so i went by Dick's for a hamburger and was received with a heroes welcome which was funny and I got to tell THIS KID that he wasn't working hard enough. Good Times.

Caught my bus and headed for The Market and went and watched Murray at the Zig Zag and achieved a personal goal. I ordered something that he looked up. Its a petulant thing but I am giddy.....
Went over and saw Casey at the Can Can and enjoyed another glass of the Willett Turned out there wasn't a price in the system so we guessed and parted ways.

After this night I decided to do something that I really wanted to do, so I went to Sun and got a glass of the Black Maple Hill and ended up consoling a friend who had just broken up with his gal. read the Murray link for this quote :

Q: Do people confess their sins to you?

A: That's one of the first things I learned as a bartender. Whatever a customer says to you must be considered like a confessional. You hear a lot of stuff about infidelity and money problems. Sometimes you think, gosh, I'm glad I'm not that person. It's made me slower to judge.
Posted by KL at 10:22 AM No comments:

I recently went to Costco with a co-worker and amongst the unexpected $250 I decided to spend I picked up a 24 pack of Mexican made coca-cola. No high fructose corn syrup. %100 delicious. It also seems to mix with bourbon better than anything I have ever had out of a soda gun. Not just a little better but A LOT better. Try it if you can find a box marked " Heche en Mexico"
Posted by KL at 5:06 AM No comments:

So one of my favourite quotes from my old lead singer is as follow. We we're sitting at Linda's and He says to me, " is there a girl looking at me like I'm on fire?" Sure as schnitzel there was and about ten minutes later she came over and said Hi and did all the small talk stuff before asking him out.( which being engaged at the time he politely turned her down.) Well tonight I kinda had that feeling and sure enough I got asked for my number. I don't really hit on girls at work, but If they do the asking, I'm usually game.

On a side note: had a DRUNKEN evening last night where one of my closest friends decided to leave because as he put it... "He's gone over to the dark side" I threatened a newer friend and had him worried that I was going to stab him. I don't recall actually having a knife, but He assured me that I had assured him that I did. I need to watch myself more closely it seems.

Lastly I am happy to say that my jobhunt is over and I'll be working at The Sitting Room 2-3 days a week.
Posted by KL at 3:53 AM No comments:

This is starting to piss me off / Being upset in the morning is a bad thing.

First:
I am in the middle of hunting for work currently and am seeing a trend that is disturbing me. I have given resumes to 3 places that I have known to be looking for help. 2 of the 3 had ads on craigslist. I've checked back at all three a week after to find the places have hired really pretty girls to work for them behind the bar. One of the three was competent, granted, but I'm pissed that places that are trying to be "classic" are hiring people they need to train. Drinking has been around for YEARS! The realm of knowledge that the job entails is in place. I understand that a manager would like to leave their mark on an establishment but if you are hiring someone who doesn't know how to make a Manhattan you are really selling your bosses short.
Second:
http://www.komotv.com/news/local/17414509.html
LAKEWOOD, Wash. -- A local woman who rescued dozens of animals that were left behind by deployed soldiers is being told to give them up.
Diana VanDusen began taking in stray and unwanted pets after the animal shelter at Fort Lewis shut down. Most of the animals are old or disabled, and most come from military families from Fort Lewis who have had to move overseas.

Some of the soldiers reclaim their pets when they return home, but others do not have such a luxury.

"The rest (of the soldiers) - they had to abandon (their pets), because they didn't know when they were coming back," said VanDusen. "One cat I held for two years, and no one came back for it. So I knew it was time to adopt it out."

VanDusen keeps some of the animals in her home and the rest in an enclosed space in her backyard.

But Animal Control officers told her she's in violation of city code, which states one residence can only house up to five animals.

Officers told VanDusen that she would be fined $500 if she does not reduce the number of animals in her home to five by April 14.

VanDusen admits what she's doing is against city code, but she wants the city to realize there is no alternative.

"I just want Lakewood to show mercy. I mean, they themselves said there's nothing wrong with what I'm doing," she said.

The city's mandate leaves the soldiers' animals with nowhere to go, VanDusen said. Many of the animals in her care are old or demand special care.

In describing one of her dogs, VanDusen said "he's blind. He has a neurological disorder on his back legs. He's old, he's 14 years old. Who wants to adopt a dog that could pass away in a few months?"

Public shelters operate under adoption deadlines, she said, and animals that are not young and healthy will have a tough time getting adopted within the time frame.

"They're a big facility, yes, but they have deadlines on their animals," she said. "Here, they can stay as long as they need; I don't euthanize."

VanDusen said turning our backs on the soldiers' pets is simply unacceptable.

"We're supposed to support our troops," she said. "If they can't support the troops by supporting the animals of the troops, then I can't live in a city that doesn't back our troops. Because these guys are innocent victims of what's going on over there."

She said she's even considered moving.

"If I could relocate myself and my animals within that deadline, I would. But you see how the housing market is right now," she said.

VanDusen currently has around 20 animals in her care. She needs to find a permanent home for most of them before the city's deadline.

"It doesn't happen overnight," she said.

She's working to place those animals, but hopes the city will change its mind.

"(The city can) do monthly inspections, do whatever they have to, but let me stay," said VanDusen.

Anyone who'd like to adopt one of the dogs or cats can meet VanDusen's animals at the Puyallup PetSmart at 120 31st Avenue between 10 a.m. and 5 p.m. on Saturday.
Posted by KL at 7:23 AM No comments:

So yesterday I received an email from a blogger whose blog I read:
Hey Kevin

Sorry if this has taken a month to reply to, it seems I've been spending more time behind the bar and less in front of the computer these days. Which is great, don't get me wrong, but, well, you know.

First off, I'm sorry that your ex led you down the dark path of getting wrapped up in my website. I think you should hold her accountable for such an inordinate waste of time.

Second, I've actually heard of Sun Liquor, we get a lot of Seattleites (is that a word?) that come down here for school. Well done, I'll have to pop in the next time I'm up there - probably this summer. I have a good friend that works/worked at the Virginia Inn, so I need to make it up there soon, sit at his bar, and bust his chops all night.

Anyway, thanks for writing, keep on reading, and we'll talk soon.

Kevin Langmack wrote:
Hi,
my ex-girlfriend, who spends majority of her time online made, what I feel, to be a last ditch effort to win points with me by finding your blog. I spent the first hour of my shift(slow happy hour) reading it over and I am thoroughly impressed. I bartend at a place in Seattle called Sun Liquor (http://www.yelp.com/biz/sun-liquor-seattle) and am in the process of refining my classic cocktail skills and trying to make a name for myself and just wanted to say Hi. I wouldn't mind starting a correspondence if you have the time and interest. We have recently brought in a few Oregon gins(aviation, rogue spruce, cascade mountain) and am impressed by what is going on and would like to be in the know as much as possible as far as northwest distilleries go. In closing, just wanted to say Hi and that I enjoyed your blog.
KL

Website: myspace.com/langmack
Posted by KL at 3:14 PM No comments: