I think my computer loves me.

For some reason, every time I go to the lower right corner it kicks into this Jens Lekman mp3 along with the weather and a random crop of a photo showcasing just over my shoulder... I have no idea why this is happening, but have no real problem with it.

I'll write of the trip to beruit later but did pick up some nice additions to the home bar while in Portland. 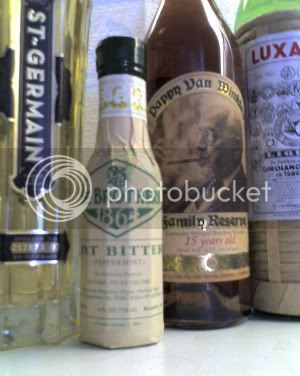 Pappy Van Winkle 15 yr.
St. Germain
Luxardo
Fee bros. Mint Bitters
All in the same store in Portland, which was open on Memorial day.
Posted by KL at 4:51 AM No comments:

Opinions are like Assholes. V.1 (p.s. there is a reason you are working days)

What a day! and a day off no less! I like the exclamation point and incomplete sentences!

I had an interview for a new bar/restaurant that is opening in a month or two yesterday and feel I gave one of the best interviews of my life. Personally I am all for the technological age that we live in and would prefer to email a resume to prospective employer and save the paper, but they wanted two actual hard copies so I had to go to kinko's. I keep my resume in a google doc file (which makes access a breeze) and originally wanted to use a mint green paper, but nothing was close so I decided to use red paper.

Aside: I had heard a story a while back about a monster.com job posting that recieved something like 5,000 resumes. Basically it was too many to go through so the person in charge decided to discard all resumes that were on white paper. Hence the red.

So I pulled it up and printed it out on the red only to have that annoying page 1 of 1 at the top and all the other crap at the bottom. I ended up cutting it down to a nice square piece of paper that I feel made it more of a presentation piece. The interview went well and we moved onto the space to check it out.

This was the first time I have ever been inside a bar as its being built and had a great time as the owners and bar manager were taking me through the build out and visualizing what they are going to be doing. I liked it even better that they were talking at me like I was already a part of it. I hope i get this.

So I'm going to try to write a scathing review without naming names.

Before the interview I went and had myself a damn fine lunch. There is a restaurant/wine bar at a place named after a color that I have an ex that worked there when that place opened and she used to bring me her leftover lobster macaroni. Yes i said that right. LOBSTER FUCKING MACARONI! I have avoided going in there forever but after 5 days of work I wanted the lobster mac. After pouring through their enormous wine list and finding the cocktail page I saw a sazarac and went for it. I would like to talk trash, but it would be like talking bad about Christmas. They did use a sugar cube and the training was there, but I felt slighted as i ordered while another couple was closing out and asking about where to go in town while the girl behind the bar spewed out recommendations, after my food showed up (brought by a waiter no less so she wouldn't have to do any more work) My food and drink done with she was still talking to the same people. I left my card on the bar and went outside to smoke and came back and waited 5 minutes before flagging down a waiter to grab the bartender She came back and asked "oh, did you want something else?

"Sure... do you have maraschino liqueur?"
"yes"
"Can i get an Aviation? Its Gin, Maraschino liqueur, and lemon juice"
Went through proportions and it came out good, closed out and left.

Went to the interview and among the conversation I was recommended to pick up a copy of Imbibe!. So after barnes and noble I looked across the street and saw a place that had Martini-Manhattan Memorial in brass on the side of the building and figured what the heck.

I now think this is on the side of their building because its where drinks go to die.

I did the same deal with ordering an aviation and explained it and got possibly the worst thing I have ever seen. It was basically a martini using Aviation Gin with a dash of maraschino cherry juice and olives. I rarely refuse a drink but I had to this time. I politely explained that this was not what i was looking for and asked if he knew a Vesper. He double checked with me that I knew that it was vodka, gin, and as he pronounced it, "lil-it" and went for it. As he went to make the drink something happened where he knocked over half a dozen bottles and was flustered as all hell. i got my drink and my check at the same time and although I don't think I did anything wrong, I got the point. Threw my card in the cup and ten minutes later was closed out and on my way.
Posted by KL at 6:11 AM No comments:

Super slow monday but what made me personally laugh the most was former american idol contestant Blake Lewis sitting at my bar wooing some girl. he sang, got close and was all over dreamy towards her....

Aside from that had only a few of my favorite monday regulars in tonight which made the night painfully long. Had tons of time to read and in prepping for the next MxMo ( which i learned is a monthly occurrence, not weekly ) started stumbling through Bourbon recipe's to no avail.

it was good but, not good in my opinion, I couldn't get hooked on it.

So I'm on day two of five. The past few years or so I have had few set days and was always willing to pick up a shift if asked. So when asked a while back I agreed as always, but now I am actually realizing how much I am working behind the bar. 4 days is ideal for me I think. I have always worked dual jobs to keep me sane since I let a place work me 56 hours a week for a few months. I like the change of pace from working separate places.

So when I was hired at the new bar I was asked to cover this sunday while my owner went to Italy. this s the first time in forever that i have done 5 consecutive shifts in I don't know how long. I'm already tired. Fortunately i get the little break in the routine by working Monday at Sun.

Fortunately for me last night I was invited by a buddy to hang out with a few of his co-workers. Apparently it is common place for the employees at his bar to massage each other. Weird I know, but I am all for it now.

I'm trying to find the topic for MxMo and hope to have a post tomorrow.
Posted by KL at 2:32 AM 2 comments:

I've been having nothing but positive feedback from everyone I have shown the blog to. If you are reading thank you and i will try to stay entertaining at least. A big thanks to Keith again for the mention. Now I just have to worry about explaining this to the boss.
Posted by KL at 3:12 AM No comments:

Its nice to treat yourself sometimes. 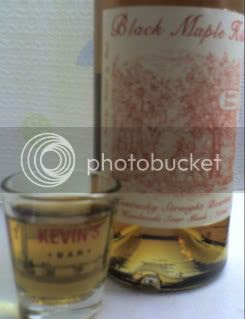 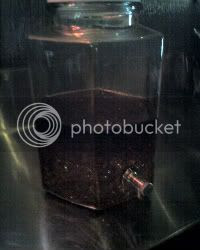 At Sun we have a house infused Black Tea Rum that is super quick and easy to Make. Simply steep your favorite black breakfast tea into a low bottle of silver rum and viola! Usually only requires 10-12 hours.

So we have been using it in a Sun Lemonade: 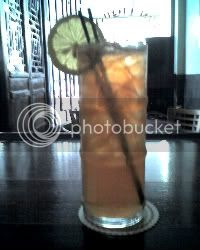 2oz. Black Tea Rum
1/2oz Simple Syrup
Juice of one Lemon
Combine in a tall glass and fill with soda or for a variation use ginger beer.
Posted by KL at 5:20 PM 4 comments:

Impatience is not a virtue

So I sampled the rosa and deemed it worth showing off. 3 days seems ok. Although on the next attempt I plan on using Cazadores and truly giving it a week.

So I'm making Thursdays my "going out" night and last night went and tried a the namesake from Keith @ the Union. Its in the current issue of Imbibe. after that he made me a Silver Lining which was fantastic. Also got to witness him cut off a guy who was talking with sunglasses over his mouth. Let me remind you it was inside and night time.....

Tried to go have a seat at Zigzag but couldn't. I blame the 6 people sitting at the bar drinking a bottle of Champagne. Seriously get a table.

Next on to the Can Can where Pinwheel Bingo was happening. I may have to actually come down in time next time to participate. An ambassador from Plymouth was buying drinks so I had a delicious Corpse Reviver #2 which was made into a training exercise as Casey is training his barback. Gave a sample of the Rosa and it was deemed tasty. Was forced another Corn and oil, explained the Lack of Will, and went through a Green Point.

I picked up a copy today and its chock full of great recipes.

As we're approaching Suns 2 year anniversary ( May 15th? ) I'm hoping that maybe next year our bar will be mentioned. I'm currently mocking up a potential cocktail list for the sitting room and I've been in a naming mood. So far i've come up with the following:

I got done with work@SR at midnight and headed to Sun for my roomie / barbacks birthday party and sure as schnitzel he was in top form. After he left the bar emptied out and I got to talk drinks with the boss and my offering was:

I get naming rights but i think his is better by far. the lemon plays with the aj and gin so well.

p.s. Official documentation has not been assured.
Posted by KL at 2:34 AM No comments:

So yesterday being Cinco de Mayo I decided to do a Tequila infusion. Its based on 1937 infusion by Chuck Baker.

"Tequila por Mi Amante; Mexico City, 1937
This is a prepared beverage requiring patience and from three to four weeks.

Wash and stem the berries, put into an airtight jar or bottle, pour on enough tequila to cover. Shut tightly and stand for at least 21 days. Strain... This berry process extracts some of the raw taste, adds a rosy dawn touch. Our Mexican drinks it straight always. We opine that handled in the same way as sloe gin, discoveries would be made...."

Also inspired by a friend who was playing with rose petals, I threw a bunch into the mix hoping it will add colour. I'm going to check it in a week and see how its tasting.
Posted by KL at 3:43 PM No comments:

Witnessed by Murray and Dylan
Posted by KL at 6:45 AM No comments: