Fuck You South Beach. I wish I made this up.

Granted after Tales I wanted to be more professional in my writing but some stories are too good not to share.

I was having a relatively slow evening until around 10 pm when the bar went from empty to full in a matter of 20 minutes. At the time of this story every table and every bar seat was full.

This guy came in with his entourage and stood just inside the door waiting to be seated, granted we don't do table service and its first come, first serve at the bar this may seem unusual for out of towners. After 5 minutes he snapped his fingers a few times and said ( yelled over the music ) , " Can we get some drinks over here?"

I was closing out 2 tabs and making 3 drinks, but went over and explained what I was doing and if he wanted, he could come over to where the service area was and I'd be right with him. So when it was his turn he flipped ( I mean he got a good 1080 degrees on his card before it laid out on the bar before me ) his card on the bar Yup, this jackass had a black AMEX.

For those of you who don't know what a black AMEX is, it is the highest level offered by American Express. THE CARD IS MADE OUT OF FUCKING METAL. It has a minimum of $500,000.

At this point I was extremely happy to politely slide the card back across the bar and say " I'm sorry, we accept visa and mastercard." I know the east coast regularly accepts amex everywhere, but our little unrecognized backwater burrough does not. He gave me a visa card in its place. If you have the black amex you better be damn well carrying something else or..... maybe.... cash you fucking bigshot.

I carded everyone and he was sometime in the 60's and the girl he was obviously was with was '81. They were all from Miami.

She asked if I know how to make a Razmatini. I said I have never heard of such a thing, but had Raspberry flavored vodka and could do something, but he got upset and ordered two Grey Goose Cosmos and a crown and coke for their friend who actually was the least masculine of the group.

They stormed outside and I went back to my 5 deep line and less than 10 minutes later came right up to the bar and he demanded to be closed out.

I said I'd close him out as soon as I was done with the drinks I was making and his response was "Fuck it, keep the card"

Minutes later the girl came back in and said they needed the card for the rest of their trip an closed out with a zero tip.

I just want to publicly say thank you for coming in and spending your money at my bar.
Posted by KL at 3:28 AM 3 comments:

Back to the grind. 10 days off followed by 5 nights on is not advised. However I had a great work week. I worked Spur Gastropubs 1 year anniversary and had the busiest monday ever at Sun Liquor. I may be adding a 3rd spot in the mix rather soon. I'm still figuring out how to take the .aiff files and turn them into mp3's and finding a site to host them, but some more content from tales will be up in the future.

Anyways I was hanging with a friend who said something about her friend drinking risky. Upon further explanation I found it to be a combination of rum and whiskey. This could be a whole new field. 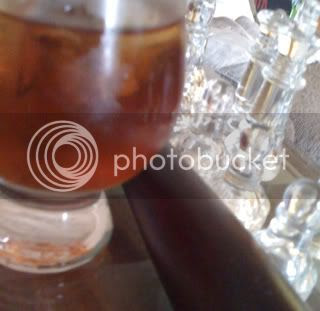 Well, that was fun.

Tales is done, and for my insides, not a moment too soon. ( Not having is as rough as Waldbauer, but close. ) I have a bunch of fun stuff like seminars that I recorded and lots of photos that will be put up over the next little bit. Some funny stories, but most of those needn't be public record. I would have written more while here but the interweb isn't the best at my hotel, and I lost phone service for 3 days.

Favourite quote of the week:

My mind just was blown.

So for those of you that just saw this blog at the bloggers seminar, welcome. I didn't know it was going to be up there but big thanks to Paul for including me. Remember everything he said about ACTUALLY reading these things and not mass emailing me with stuff. However, the part about sending two bottles and not the god damned airline bottles, I fully endorse.

So, I'm wearing one of my favorite t-shirts today which has "Shalom Y'all" and some hebrew on the front, and after leaving the Seminar saw Chris McMillian and wanted to say Hi. Turns out that this shirt is actually from NOLA. It was an old advertising campaign for one of the oldest Jewish business in this town. I'm wearing this shirt in the last official family picture before my brothers passing and its always been dear to me. It had always been a mystery to me about its origins and now knowing and learning about it from McMillian was rad.

I now have to decide between attending the fine art of tending bar seminar or guest bartending at a strip club.
Posted by KL at 12:19 PM No comments:

So far, even being the cynic I am I just have to say this is he best vacation I could have asked for so far. My only disappointment has been the fact that my 650$ lanyard doesn't get me access to the swag room. Seriously WTF?!?!? Guess I just have to boost my media presence.

I've met a LOT of rad people and ran across some others I know so far. I got to meet and shake hands with Dale Degroff, Met David Wondrich, who was with Tito. Met Anne who is putting on Tales. One of the Fee Bros. Numerous others who I will remember later, sorry I can't name ya now.

Looking forward to the swag off tonight. I'm sorry this isn't more cohesive, but its fuckin tales and I been drinking since 2 days ago. Might have to learn to be a better blogger..... oh wait that is tomorrows seminar.
Posted by KL at 4:51 PM No comments:

Flying out to tales tomorrow and am happy to be on vacation. I decided to give in and use twitter for the trip and feel free to add me as drinkingbits. If you are there say Hi.

I was caught and slightly inspired by a story recently about variations on classics and I will admit that finding old recipes and making the basic recipe work for what we can get on hand is always a fun challenge. I found this recipe in Boothby's 1934 World Drinks and How to Mix Them. So I haven't done the research to know what a jigger was in 1934 and I'm not sure what kind of spoon Mr. Bill was using but the recipe calls for equal parts gin and cointreau and equal parts grenadine and lemon. I've tinkered a bit and want to report the following:

Using shitty ingredients like well gin, triple sec, sweet/sour mix, and rose;s grenadine makes this a bad drink.
Using a higher proof gin like Junipero or Bellringer to offset the sweetness of the Cointreau works amazingly.
If using a london dry change the ratio to 2 to 1 and go a touch heavier on the lemon and aslo the grenadine.
Using Lime instead of using Lemon makes for another nice variation on this old school spring time classic. 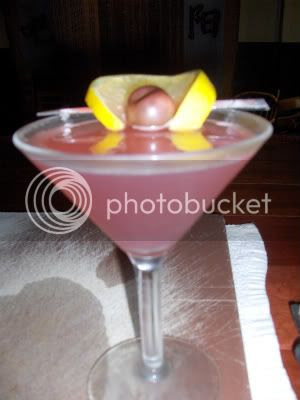 I've also been a fan of garnishing by taking a lemon (or lime) wheel and cutting like 10% out and spearing with a cherry.
Posted by KL at 5:02 AM No comments: