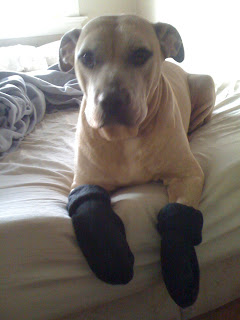 Thats my Dog.
She is the laziest bitch I know. She has some really bad habits, can occasionally puke or crap all over the place if I work too long of a shift and my roomate is at his ladys place, and occasionally licks her paws til they raw. Her original owner committed suicide and I have had her since 2002. This picture was from one from one of those times. I had to tape socks to her so she wouldn't do more damage. She is at this moment in time hopefully enjoying the finest service from Downtown Dog Lounge getting a bath and her nails done.
Today being the first day off in the last 5 I was feeling silly and I think I pulled off one of the funniest pranks I've ever done. I mean no dis-service to the police. They do a great job if you decide to call them. 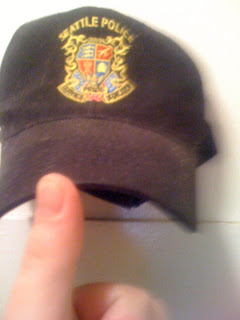 Back in my fast food management career I became good friends and got to work alongside with a lot of our cities finest. One of my officers was a fan of hats and since we always wore Seattle Supersonics hats and shirts on gamedays, As a manager I worked a deal to exchange a Sonics hat for a SPD cap. I don't wear it out often cause it has a magical +1 ability where when I wear it people don't want to talk to me.
Today I wore it as I got coffee and a doughnut and took my dog to the DDL. I usually get funny looks from people but moreso when I wear the hat. Dressing in all black and wearing it to an afterhours party and getting trashed and making out with that asian chick was not a good idea.
So as I arrived, after taking my dog on the longest walk she has had in a while, made her sit, and stay on the couch while they handed me a clipboard to do paperwork. Afterwards I had to keep as straight a face as possible while wearing a SPD cap and walking around, clipboard in hand, and coffee in the other. My dog had to go into a kennel, AKA doggie lockdown.
I also stopped in again and got another doughnut and coffee. I have to pick her up in about 2 hours. Think I'm going to hit the shower and enjoy my day off.....
In parting, here's a photo from the good ol' days. 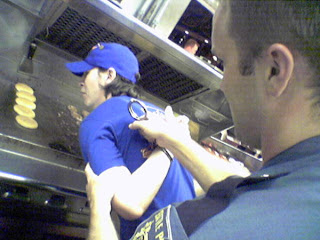